Fremantle A Day out , Discover Fremantle

With so many things to do in Fremantle you will be spoilt for choice. We are here for a week then go to Margaret River and return for another week. We have friends in the area so will need to plan things to fit in with others. The first day I checked that the water went down the plug hole the other way. It did, so then we had a walk around town. We picked up 2 x Optus sim cards at $20.00 each. They were valid for a month, unlimited calls , Texts and 15gb data for use in Australia from Coles  the Supermarket.

While there we did a little grocery shopping as we were staying in a self catering apartment. Jam, Marmalade, cling film etc. The groceries that we could cart around with out the need of a fridge during our trip. In the evening we went to the Wharf/Fishing boat area. We had fish and chips at Cicerello’s Fremantle. Food out was planned for the first day. We did not know when the repercussions of our 17 hour flight would kick in and floor us. As it turned out, we streamlined into our new upside down world and the body clocks functioned well.

Trips out and about in Fremantle

We had quite a large list of things to do in Fremantle. First on our agenda was to pay our respects at the Fremantle War Memorial for Armistice Day. We got there around 10.30 am and stayed for the prayers and reef laying. After this we went for a walk. Our plan was to walk to Rainbow Sea Container down near Swan river, then walk over to the Fremantle Arts Centre .

Sunday was Music at Fremantle Arts Centre a free weekly live music program. Rob Snarski  was playing. He has played in several Australian bands including Chad’s Tree, The Blackeyed Susans and The Triffids since the 1980s. Performing solo, Rob returned to FAC with a guitar case full of songs, new and old. The venue served food and had a wood fired pizza oven and a bar. The stage was outside on the front lawn with plenty of space to sit and chill out on the grass.

We visited the Arts Centre a few times first to see an exhibition of paintings by several artists. Then we attended a Christmas craft makers market. They seem to have a fully weekly schedule of events. Music and Arts based.

Step inside the Fremantle Markets and enjoy the distinctive atmosphere of over a hundred years of vibrant culture and heritage. Fremantle Markets plays host to over 150 stalls. If you are renting an apartment then this is the place to buy your fresh fruit and vegetables. They also host bakeries that sell bread and cakes. Family run cafe’s are plentiful selling every type of cuisine you can imagine. There are hundreds of craft makers/designers, selling things like homemade soap, ceramic, and art. You can find Fremantle Markets on South Terrace which is the main street running through Fremantle.

This is also the place that Buskers meet and entertain you. There are about 10 buskers on a Saturday and Sunday, each taking a pitch for around an hour or so. The only downside is the opening hours Friday, Saturday, Sunday and Monday Public Holidays 8am till 6pm. Not good if you need your fresh groceries on a weekday.

The E Shed is located on the waterfront with a magnificent view of Fremantle Ports. Take a stroll down to the jetty area to the left of the Train station, and you will find the E Shed Markets on your left. The Markets open Friday Saturday Sunday. E Shed Markets is a riverside marketplace with vendors for vintage & antique goods, crafts & souvenirs, plus eateries. They hold live music events throughout the year and seasonal events like a Christmas Carnival.

Its a nice place to look around maybe on your way back from Rottnest Island, or to get a coffee from before your trip. They have a lot of craft stall, most seem to sell imported goods like T-shirts and hats etc. Its kind of like the market stalls that you find on most High streets in the United Kingdom. The bar area outside has some nice seating and views of the waterfront.

The Museum is home to the winning America’s Cup yacht, Australia II, an Oberon class submarine — HMAS Ovens, Jon Sanders’ Parry Endeavour and many other iconic vessels from WA’s maritime history. Open 7 days a week from around 9.00am till 5pm

Day trips to Rottnest Island with Sealink There are several ways to visit Rottnest Island. This is an easier way if you are staying in Fremantle. Boats also run from Central Perth and other places along the coast. Tickets cost around $70.00 for a round trip , this includes the Government admission fee. Main boarding times are around 07.00, 09.00 and 11.00 .

Rottnest Island is 19 kilometres from the port city of Fremantle, the ferry crossing takes approximately Thirty minutes. For passengers travelling from Perth, the ferry journey is approximately one and a half hours.

You will need to allow a Thirty minutes minimum check-in time prior to departure in order to collect your boarding pass(es) and make appropriate luggage arrangements. If you are travelling with no checked-in luggage and have a QR code ticket you will not need to check-in at our office, and can simply head straight to boarding.

If you are checking in luggage, you will be required to check-in at our ticketing office first to collect your luggage tags.

Boarding for all passengers closes ten minutes minutes prior to departure. Both Fremantle and Perth departure terminals offers disabled and family friendly restrooms including a baby change table.

Housed in a gothic heritage building in Fremantle’s east end. The Fremantle Arts Centre is the City of Fremantle’s premier arts service and one of the leading arts organisations in Australia. FAC presents contemporary visual art exhibitions and a varied program of concerts and events from local, national and international artists. With a wide range of art courses for adults and kids, an Artist in Residence program, Shop which sells the largest range of WA-designed wares, a quaint café and beautiful leafy grounds, there are always plenty of reasons to visit.

FAC’s commitment to supporting local artists is at the heart of all the centre’s programming and activities.

Marcus Canning’s ‘Rainbow’ was installed between the bridges at Beach Reserve overlooking the Fremantle port in 2016. At 9-metres high and19-metres long, and tipping the scales at 66 tonnes Rainbow is not your average public art piece.

The sculpture by prominent Perth artist Marcus Canning is constructed from nine recycled sea containers joined to form an arch.

Canning’s artwork now welcomes visitors to Fremantle whether they’re arriving by train, car or boat. It overlooks the Swan River as well as the container port from which it draws part of its inspiration as a universal symbol of hope and acknowledgement of Fremantle’s artistic as well as maritime heritage.

See it for yourself at Beach Reserve adjacent to Canning Highway, overlooking the Swan River and the port! It’s 1.6 kilometres from Fremantle bus and train station. There’s plenty of parking at East Street Jetty on Beach Street. It’s a short walk up the ramp behind the café or you can hire a free bike from Fremantle Visitor Centre in the town hall.

In 2010, Fremantle Prison became the first building in Western Australia to be included on the World Heritage list. Its inscription on the World Heritage list was part of a serial nomination with ten other Australian Convict Sites. The site is also recognised on the National Heritage List and State Register of Heritage Places.  It is classified by the National Trust and is part of the City of Fremantle’s West End Conservation Area.

Decommissioned as a maximum-security gaol in 1991, the Prison was continuously used as a place of incarceration for almost 140 years.  With death row, solitary cells and gallows, it is a monument to a system of punishment that is uncomfortably recent. Since opening to the public in 1992, Fremantle Prison has developed into a successful tourist attraction and welcomes thousands of visitors through its gates each year.

Entry to the Gatehouse is free of charge and includes: the Convict Café, Gift Shop, Prison Gallery, Convict Depot and Museum. Without doubt, the highlight of a visit to the Prison is the entertaining tours conducted by experienced tour guides who bring the rich folklore and stories of the Prison to life.  With a choice of intriguing day tours, spine-chilling torchlight tours and ‘extreme heritage’ tunnels tour adventures, there is something for everyone to enjoy.

Fremantle Round House. The Roundhouse is the oldest public building in the State of Western Australia. Opened in January 1831, just 18 months after settlement, it was built to hold any person convicted of a crime in the settlement and was used until 1886.

After it ceased being used as a gaol it became a Police Lock-up until the late 1890s and then was used as accommodation for the Water Police, and afterwards as a storage facility for Fremantle Ports. When threatened with demolition in the 1920s it was saved and later control went to the State Government before it was deeded to the City of Fremantle.

The WA Shipwrecks Museum is recognised as the foremost maritime archaeology museum in the southern hemisphere.

The Museum is housed in 1850s-era Commissariat building and has since been restored to its historic glory. Steeped in history, the galleries house hundreds of relics from ships wrecked along WA’s treacherous coastline, including the original timbers from Batavia (wrecked in 1629), the de Vlamingh Dish, and also countless artefacts from the Dutch shipwrecks Zuytdorp, Zeewijk and Vergulde Draeck.

The Dingo Flour sign is a well-known landmark of a stylised silhouetted dingo in red on the side of an historic and heritage-listed working flour mill in North Fremantle, Perth, Western Australia. I have tried to find out a bit about the history of this mill. Every page I find contains different information. So all I can say is that its a good land mark and an iconic painting in Fremantle.

Location of Dingo Flour Mill, you will pass it of you are driving off towards to Cottesloe Beach. Take highway 12 Queen Victoria Street over the River. Then first left and follow the road around. You can park up near the apartments between port beach and Leighton Beach. Location Map for Dingo Flour

For the Love of Travel Australia 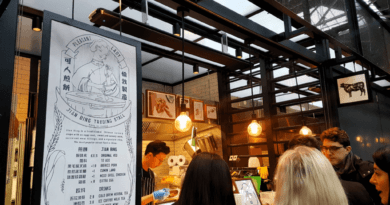 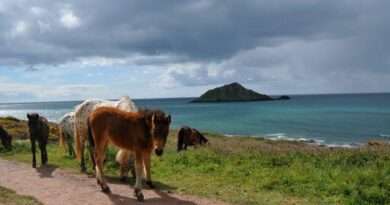 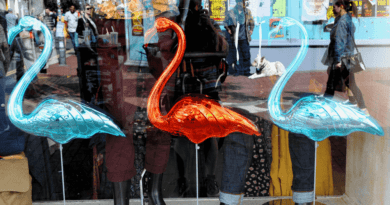 Brighton A Day Out

4 thoughts on “Fremantle A Day out”